The Frackers will play 35 home games at Ricketts Park, bringing in teams from Arizona, California and Nevada 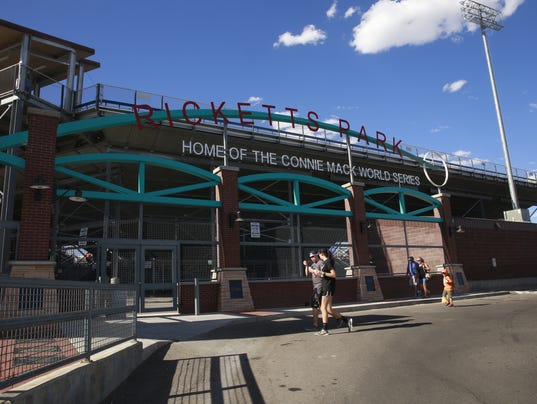 FARMINGTON — When the Farmington Frackers take the field at Ricketts Park this summer for their inaugural season in the Collegiate Baseball League they won’t just bring high-quality baseball, they could also provide a boost to the local economy.

The team will play 35 home games between June 1 and July 9 with one of six teams from California, Arizona and Nevada coming in every week for a five-game series. Rosters will be made up of players from around the western states, which could draw tourists to the Farmington area.

“It definitely helps when you get parents of kids who are playing come out and watch them play if they’re in proximity to do so,” San Juan County CEO Kim Carpenter said. “I’m optimistic that we’ll see a little bit more use in our hotels, which already have a high usage rate. People will want to buy things in the community and eat and shop here. There’s an optimism with anything you do that brings something new to the area.”

A memorandum of understanding between the league — which is run by High Plains Baseball Corporation — and the city of Farmington includes a commitment to keep the Frackers in Farmington for five years. However, the agreement may be canceled without penalty or cause by either party with a 90-day notice.

Plans to place a team in Farmington began to take shape last summer during the Connie Mack World Series.

Steve Avila, who coached En Fuego Elite — representing the Northwest and Canada’ — during the 2016 CMWS said the experience and environment during the series helped spark the conversations between himself, Richard Neely and Mike Diamond, who are partners with Avila, and Farmington mayor Tommy Roberts, to form the team.

“In my opinion, Farmington is as good of a baseball community as anywhere in North America. I’ve always enjoyed scouting (the CMWS), but to be in that dugout was a whole other experience. That’s when I started talking about it with Mike (Diamond), Mayor Tommy (Roberts) and Richard Neely,” Avila said.

The Farmington Frackers will play 35 home games from June 1 through July 9, hosting teams from Arizona, California and Nevada at Ricketts Park. (Photo: Courtesy photo/Farmington Frackers)
Along with bringing money to the local economy, Neely said the AABC and the team have hired eight interns, both from high school and college, to help with key roles during the six-week season.

The Frackers’ roster will consist of 30 players from Division I college programs down to the junior college level. Avila, who’s focus in the endeavor is player and coaching personnel, said the team is in the process of finalizing a deal with a three-person coaching staff composed of individuals who currently coach at New Mexico-based college programs. The coaching staff will be announced Monday.

As far as the roster goes, Avila and other members of the Frackers’ organization are currently combing through player résumés to find ideal fits for the team.

Avila said college coaches from around the West and Midwest have contacted him about getting their players on the roster, but right now the primary focus is on finding local players.

Neely said the Frackers’ players will likely stay with host families for the season while opposing players will stay in hotels during their time in Farmington. The opposing teams’ hotel bills will be covered by an agreement made between the league and the Farmington Convention and Visitors Bureau, which will provide up to $20,000 in lodging costs for opposing teams for the first season.

There are some concerns that still need to be worked out with the team and league.

Carpenter said there are two concerns he’s heard from the community that come up most often, one of which is the sale of alcohol during games.

Neely said the sale of alcoholic beverages, which will be beer only, will be regulated and there will be a security presence in the designated beer garden area. The beer garden, along with food trucks, will be located near the general admission bleachers on the first-base line. Drinks will not be allowed outside of the area and sales will be cut off after the fifth inning of the seven-inning games.

The other major concern is the potential for overuse of Ricketts Park, which could impact the quality of the field for the Connie Mack World Series.

“I’ve seen Ricketts Park see games every night and all day Saturday and Sunday, and it withstood the amount of play that was on it. I’m not really concerned to the degree of what Ricketts would look like at the end of the summer when it gets ready for the Connie Mack World Series,” Carpenter said. “It’s a city field and the city has the right to do what it wants with the facility, and this is a great opportunity for the city and the community.”

The Farmington Frackers will take the field at Ricketts Park this summer, competing in a collegiate league with teams from California, Arizona and Nevada

FARMINGTON — Baseball fans will have another reason to frequent Ricketts Park this summer when the Farmington Frackers take the field for their inaugural season.

The Frackers will be a new baseball team made up of college-age players from around the Southwest and will be registered with the Stan Musial division of the American Amateur Baseball Congress.

“I’m really excited about it,” AABC president Richard Neely said. “It’s going to bring a great level of baseball that’s a step up from the Connie Mack World Series. Farmington fans appreciate good baseball, and I think it’s going to be a very positive thing.”

The Frackers won’t have to travel outside of Farmington for their regular-season games, playing 35 home games against teams from California, Arizona and Nevada. The season will run from June 1 through July 9, and the team will play in the Stan Musial World Series at the end of July in Seattle.

The Farmington Frackers will play all their regular-season games at Ricketts Park this summer before heading to Seattle for the Stand Musial World Series. (Photo: Daily Times file photo)

The team is still being put together, and Neely hopes to name a head coach by the end of the week, saying it will “definitely be one of the head assistants from one of the major (NCAA) Division I schools in New Mexico.”

A 30-player roster likely will be finalized in the next 30 days, and Neely said there will “hopefully be a minimum of four Farmington kids on the roster.”

Neely said he and others involved in organizing the team have been in contact with several coaches about having their players join the Frackers. He said their efforts have been greeted with enthusiasm about the chances of keeping players closer to their schools in the Southwest.

“A lot of the area D I coaches I’ve talked to are very excited because they can keep their players at home (in the Southwest) versus going to the Jayhawk or the Cape Cod leagues,” Neely said, citing other collegiate summer baseball leagues.

Along with high-quality baseball, the team and league will feature other attractions to keep fans involved and entertained.

“The collegiate league will be run very similar to a minor-league team. Almost every game, we’ll have different events,” Neely said. “We’re trying to incorporate a lot of events. We want to create something for Farmington because we need more activities here.”

We're not around right now. But you can send us an email and we'll get back to you, asap.

As opposed to the classic straight grained, cleaned end put on just about all smooth materials in the enjoy circumstance and necklace, the budget fakeAudemars Piguet Noble Oak Frosted Platinum wrist watches will be addressed with a new diamond-tipped tool. Employed to frequently look to the top of fake patek philippe the gold, the particular application produces tiny hollows, setting up a distinctive surface in which shines within the gentle.